I don’t care where you live-  this summer has been incredibly hot.  Here in the south it has been icky sticky humid as well.  The other day, as I raced around my house and my home studio working on projects and orders for Monarch Couture, I found myself wishing I had some sort of work smock.  Something loose fitting and sturdy that I could throw on and off (did I mention I’m constantly trying things on as I go for fit and for fun?).  Something that would be cool and easy that wouldn’t make me look like I was totally slumming it when I needed to drop everything and run to the store for some more thread.  I also wanted something that, ironically, wasn’t too cute, because I have a tendency to be a bit precious about darling clothes which means I don’t end up wearing them for work.  I pulled out a box of my forgotten vintage scraps, found a flannel with one sleeve missing and decided to finish it off with some  old mens slacks.  Although I don’t have a husband (enter tiny violin playing here)  I’m sure that those of you who do can steal your lovers old clothes to create this simple piece. 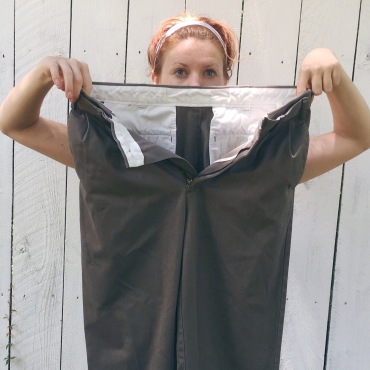 So here you have it-  a modern DIY housedress that you can modify to your hearts content and look fly while you clean the house and craft:

First-  I cut off the sleeves.  I folded the shirt in half to get an even cut on this

Next I cut the neck out.  I kept the front lower than the back for this one. 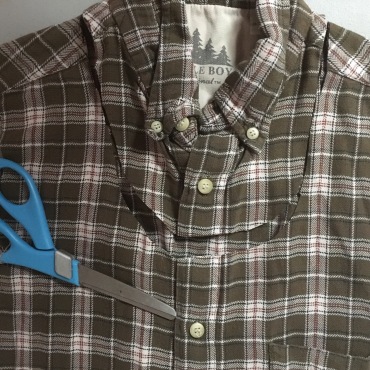 Now for the pants.  First things first, I cut off the top-  we don’t need it-  and these pants were a bad nineties nightmare so they weren’t gonna be cute as shorts. Then I cut out the seams so they were essentially now just large pieces of fabric that I could now work with to create the skirt portion of the dress. 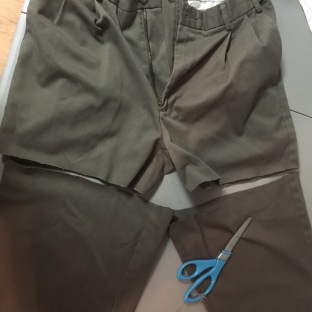 The next step was to measure up and align the khaki scraps to the bottom of the shirt. These were then sewn together at each side. 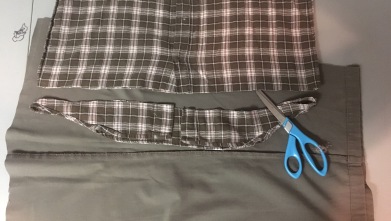 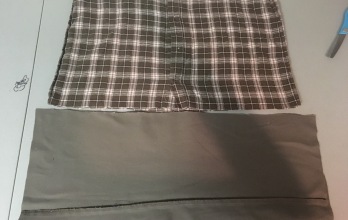 I lined up the khaki skirt portion with the bottom of the plaid shirt and sewed them together.

Ironed and hemmed and then my skirt portion was done! 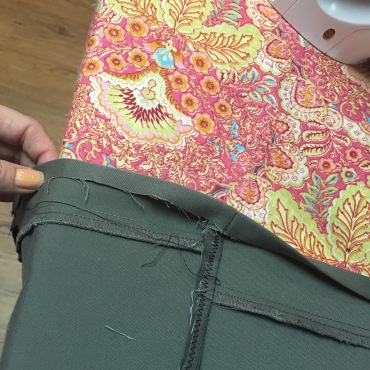 This next portion- with DIY bias tape- is a tad trickier if you are a beginner- but is actually a pretty simple way to finish the edges and use your fabric scraps at the same time 🙂 First I  cut approx 1 inch strips of the leftover khaki.  Then I pinned  these to the right side of the sleeves and neck.  I am no self proclaimed queen of the bias tape-  so I  included a great little video here from  Professor Pincushion. 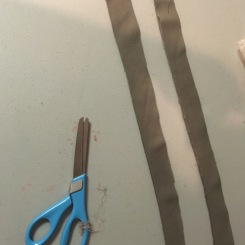 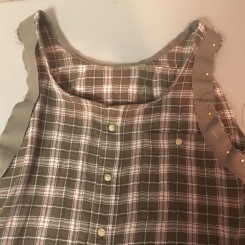 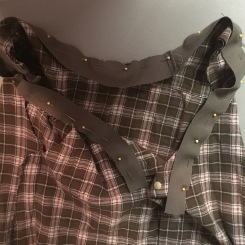 Once I had sewn all of the strips-  I folded, pressed, pinned, sewed and pressed again. 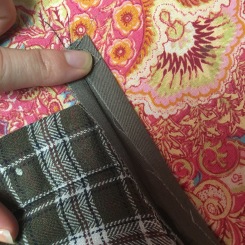 Finally, for the sake of utility- I decided to ad a pocket (gotta have a place for my scissors and my cell phone!)  using fabric from the one sleeve left.  I probably would have done two pockets had I started with two sleeves-  but alas, work what you’ve got kids. 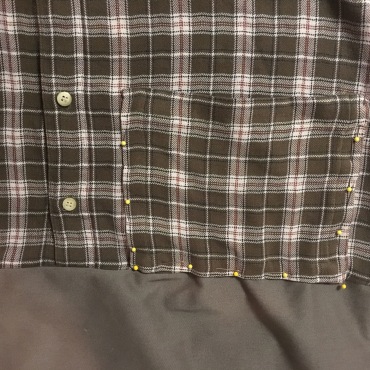 With this pocket sewn on I was officially done!  Now I have the satisfaction of knowing that if I happen to answer the door for UPS while in a sewing frenzy-  I won’t look like some half naked hippy weirdo (much love to all my half naked hippy weirdos out there tho!)  not to mention-  I spent no (new) money- to make this dress-  and repurposed some items that would have otherwise been useless!  EcoFashion at it’s finest folks!

I’d love to see you’re adaptions and inspirations of this idea!  Have a wonderfully creative weekend!